Hack The Artist At #MTFCentral 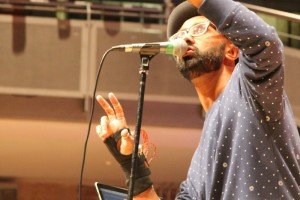 More artists and musicians, more music and technology companies, more inventors and their incredible machines, and more makers, developers and designers are joining us all the time. From music-making robots to instruments that remove barriers to participation for musicians with disabilities; from new formats for music to music made with chemistry and brainwaves.

And now there’s more to the hack camp too. You don’t have to be a programmer, an electronics expert or a maker to get involved. Artists - we want you too…

BE the artist in B3 Media’s #hacktheartist challenge

If you’re a UK-based cross-platform artist with a creative idea, a knack for storytelling and an interest in music tech - we want to hack YOU.

You could be one of B3 Media’s #hacktheartist artists. They’ll bring you to #MTFCentral in Ljubljana and register you in the hack camp - where you’ll have the opportunity to team up with creative technologists, work with new media tech and translate your creative ideas into fresh forms that will lead the way in future storytelling platforms..

Apply now to be part of B3 Media’s #hacktheartist. It’s a very simple 1-page application, and entries close 9th September - so be quick!

Hackers - we’re not just giving you some of London’s top emerging artists to play with. How about hacking one of London’s hippest DJs?

Music Tech Fest’s resident DJ (and accountant) Sydney Levinson, aka #barryslounge is bringing his box of un-Shazamable 45s, his portable dancefloor tape, his trademark badges and buttons and an open invitation for you to hack, reinvent, and mess with the eclectic and eccentric world of London’s greatest hidden musical treasure and curator extraordinaire.

For a taste of what you’re in for, have a listen to some of #barryslounge’s favourite jams - prepare yourself for surprise and delight, and leave your genre definitions at the door.

The festival of music ideas

Whether the hack camp’s for you or not, you don’t want to miss what we’ve packed onto the #MTFCentral main stage. The weekend features dozens of unique showcases, performances and demonstrations of: