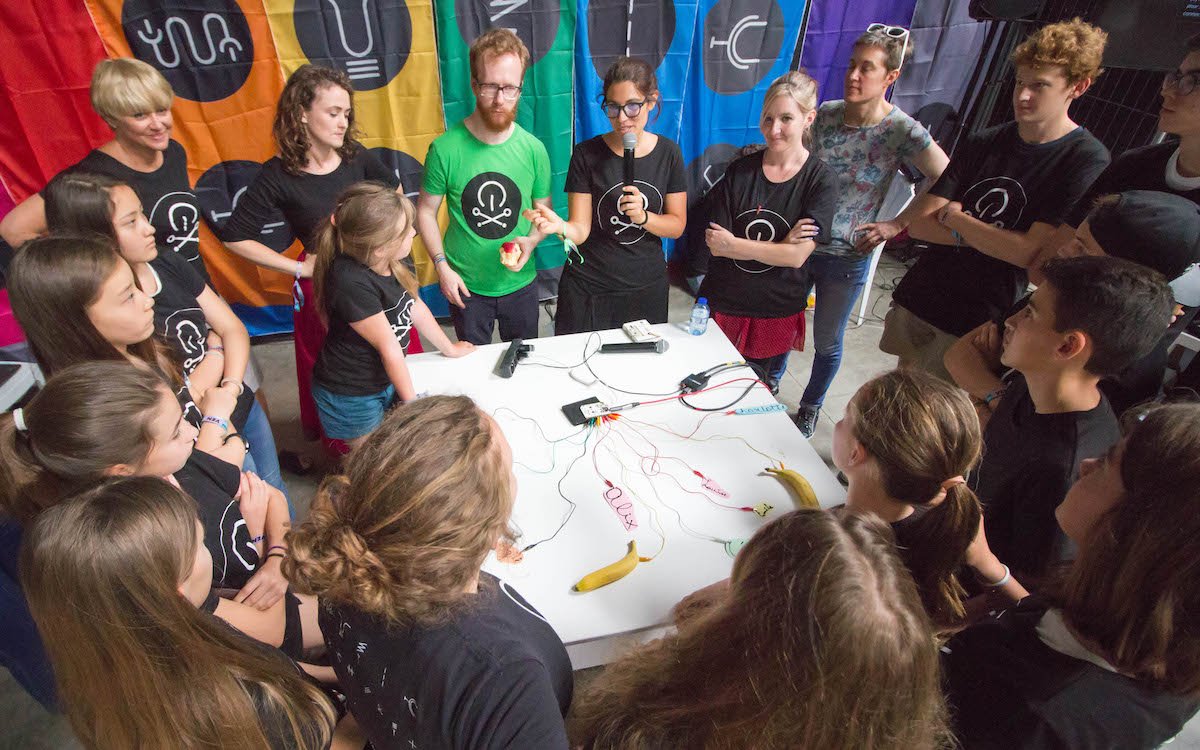 Photo credit: Marta Arniani and #MTFSparks at Wallifornia Music Tech Liege 2017 ©Andrew Dubber
“a chorus in which the voices of all stakeholders may be heard in harmony”
New technologies are often blamed for an array of societal problems including precarious employment, economic exclusion and social division. But technologies do not simply happen to us - we create them. Innovations don’t just affect us as consumers, but as citizens. The reason for this is clear, but all too often overlooked: all technologies are human technologies. Technology only works like this because that’s what we, as a society, have decided is acceptable. We have both agency and responsibility. The way that we innovate and the technologies that we create not only provide market opportunities, but also profoundly affect current and future generations.

The problems that policy-makers are called upon to solve are rarely simple. Acting in the public interest implies consideration of at least a section of the population (with its concrete needs and interests, background culture and communication style), a context of action and the related regulatory framework, all within a complicated stratification of factors.

The Industry Commons open innovation methodology, toolkit and ecosystem that emerged from #MTFLabs aims at inspiring policy-making by creating an impact at both an economic and societal level. The two aspects are strongly intertwined, as the vast majority of the economic value produced by the ecosystem is dependent upon human talent and skills, and social impact is driven by the creation of commercial partnerships and ventures.

Substantial evidence underlining the limits of top-down approaches to public large-scale problems emerged well before the latest financial crisis and in recent years, participatory design practices that originated in Scandinavian countries in the 1970s have become a growing trend. Public services are increasingly being developed according to these principles. It is possible to trace a parallel between these design practices and open innovation ones, in terms of their outsourcing and crowdsourcing of ideas and solutions, even though most of the results are currently centralised to private organisations or public bodies.

In his article ‘Resisting Reduction’, Joi Ito of MIT Media Lab develops this concept further, arguing for an innovation approach based on a humility of design that reflects our place within a complex ecosystem, rather than a desire for control over it and short-term exploitation of its resources.

We could call it “participant design”—design of systems as and by participants—that is more akin to the increase of a flourishing function, where flourishing is a measure of vigor and health rather than scale or power. We can measure the ability for systems to adapt creatively, as well as their resilience and their ability to use resources in an interesting way.

Better interventions are less about solving or optimizing and more about developing a sensibility appropriate to the environment and the time. In this way they are more like music than an algorithm. Music is about a sensibility or “taste” with many elements coming together into a kind of emergent order. Instrumentation can nudge or cause the system to adapt or move in an unpredictable and unprogrammed manner, while still making sense and holding together.

The purpose of the Industry Commons, which builds new hybrid technologies on top of existing industry capabilities, is to go a step further in making innovation a genuinely distributed process — a chorus in which the voices of all stakeholders may be heard in harmony. The resources of all participants and constituents are optimised and combined for the benefit of all: it represents a holistic approach that benefits every stakeholder - from big industry to individual citizens, and as such, it represents a model for policy-making.

While social innovation is a broad but widely acknowledged field, the social impact of innovation becomes highly controversial in the context of the use of personal data by social media and other large online organisations, and in the way that new technologies have been used to disrupt and obsolesce entire employment categories. Indeed, all innovation is social (and societal) - and the way that we frame innovation ecosystems today will profoundly affect future generations of citizens.

Innovation provides a vehicle for people to make a genuine impact upon the world, both in order to create economic value, and to improve society: to address inequalities, to wrestle with and solve major global challenges in health, the environment, energy and law, and to empower and foster local cultures and communities. These challenges require new approaches to innovation that bring knowledge outside of the individual organisation and into a managed commons that will allow citizens to develop and share new knowledge.

The Industry Commons explicitly contributes to such a vision of innovation through Creative Testbed grand challenges, which guide and ensure a positive impact for the mission of ideas developed, as well as through the centrality it grants to human resources, talent and skills development.

The Industry Commons provides a context in which to future-proof our societies through its decentralised vision for vocational agility, empowerment and entrepreneurship. According to a report by the World Economic Forum, those economies that equip their workers with the skills to participate in new technologies adapt best to the changing world. For this reason, investment in people and skills is paramount within the Industry Commons: it favours the circulation of knowledge, seeding of ideas, and supports creative minds in building unexpected bridges between large corporations and SMEs, different industry sectors and different countries.

Many of the major drivers of transformation currently affecting global industries are expected to have a significant impact on jobs, ranging from significant job creation to job displacement, and from heightened labour productivity to widening skills gaps. In many industries and countries, the most in-demand occupations or specialties did not exist 10 or even five years ago, and the pace of change is set to accelerate. By one popular estimate, 65% of children entering primary school today will ultimately end up working in completely new job types that don’t yet exist.

The Industry Commons focuses not only on the pool of human capital that makes up the 5000+ strong global innovation community that it brings together, but also on the sharing of knowledge, the creation of new categories of knowledge and, critically, the employment of communication methodologies beyond the screen and the printed page that use the affordances of the physical internet to exchange deep and complex knowledge through gesture, signalling, sound and other interactive media. It embraces new forms of communication and ensures they are human-centric instead of technology-centric.

This approach has been shown to have a strong educational impact: learning by doing (and failing), rapid iteration, and choosing communication forms that are pragmatic instead of dogmatic, make the Industry Commons a model for educational programmes which embrace digitalisation and turn it into an asset rather than a problem to be solved.

Addressing challenges of public interest; interpreting innovation as a way of creating a positive impact on the world; preparing the skillsets and workers of tomorrow; facilitating the circulation of knowledge; experimenting with new forms of knowledge exchange; making digitalisation human-centric: these are the main social impacts of the Industry Commons. In terms of economic impacts, the immediate answers are new products, jobs and markets - but scratching the surface reveals further considerations: a new approach to competitiveness and economic drivers, the streamlining of different budget categories and the consolidation of data repositories.

In a traditional capitalist framework, entities compete over the production means (in terms of reducing costs) and the markets (in terms of reaching more people) - each trying to carve for themselves a bigger slice of the economic pie. The Industry Commons subverts this landscape by establishing competition on the basis of quality and performance, and allowing for strategic partnership among former competitors, creating new market opportunities and thus growing the pie.

The Industry Commons optimises the contribution and capacity of all the stakeholders involved, which is reflected at systemic level in a more efficient economy. A part of this efficiency is represented by the exploitation of datasets (public and research ones) in the functioning of the innovative products and services developed in the ecosystem.

It’s for this reason that the Industry Commons has now been written into European Innovation policy as a high-level recommendation adopted following the keynote at the 2017 EU Open Innovation 2.0 Conference in Cluj-Napoca by MTF founder Michela Magas, where she first introduced the methodology and concept.

As a result, forthcoming European funding calls under the H2020 programme support the implementation of Industry Commons approaches to open innovation.

By leading on both the process of social innovation and the policy framework required to guide the broader social impact of innovation, it is possible to build better worlds through deliberately inclusive, decentralised and socially positive technological development, rather than simply be subject to the societal impact of technologies that are developed with only short term and centralised economic objectives in mind.