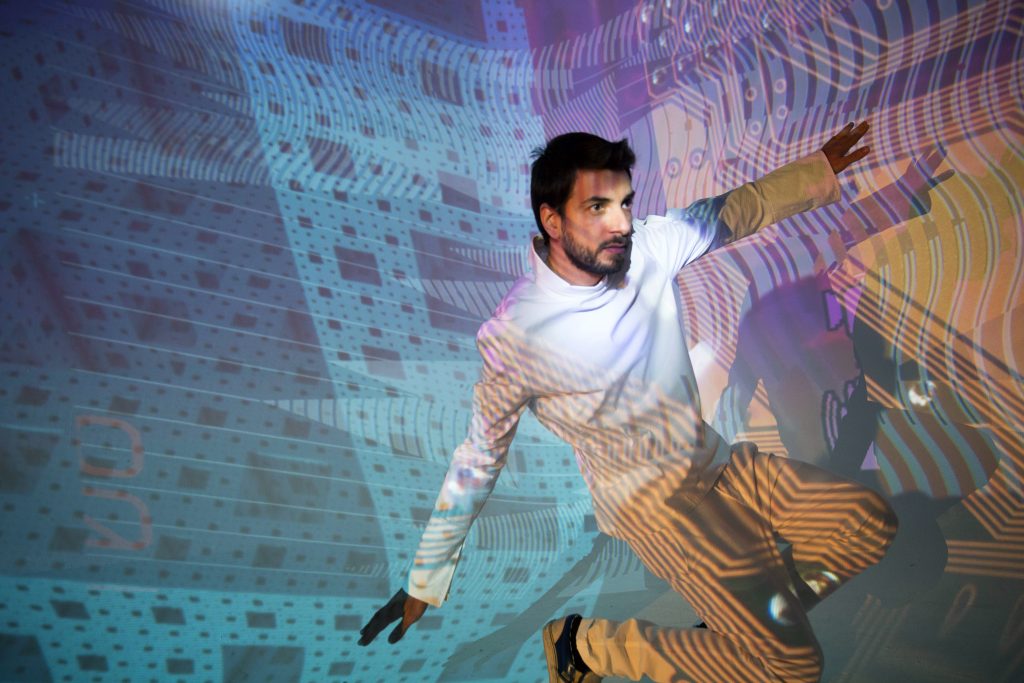 Is that what what call ourselves? 🙂

I’m Diego Ain aka Ain TheMachine and I make Musica Biotronica, electronic music made only with Body, Voice & Everyday Objects. Using technology I’m able to transform these elements into an AudioVisual Live show.

No musical instruments are allowed! And there is a good reason for it.. When I started to investigate on how to develop “my own sound” or musical language I discovered Lars Von Trier and Dogma Cine and the aspect of the Dogma manifesto that grabbed my attention the most was the forbiddance. It basically sets up a frame of limitations that leads you to work with the essence of what you have around you. And that concept blew my mind!

I believe music is a universal right and everybody should enjoy it in an active way.

Researching on how to create the frame of limitations in which I’d work, it reminded me of a common experience I had when teaching music. A lot of people have so much love and respect for music that these feelings grow in the form of barriers that prevent them from enjoying music in an active way. These barriers are translated to the “real” world by blaming others for not knowing how to play a musical instrument. As I also went through this process, I decided to create the limitations rule: “It’s forbidden the use of any musical instrument, everything else is allowed.”

And that is how I ended up making music using the sounds of the body, voice and everyday objects.

I love music out of a musical context and because of that I’ve been developing a series of videos where I make music in different situations, like:

“The AudioGastronomic Live Performances”, where all the sounds generated in the preparation of a dish or cocktail by the chef or bartender becomes the sounds of the songs.

The “Video-Songs” where I go to different events and compose a song with the participants on the spot or the #PlayTheCity series, where I use cities and regions as musical instruments.

The series #PlayTheCity evolved into an audiovisual live show, where each city is translated into a song. I use the audiovisual samples from the different cities as the start point for the construction of the songs in the live show and then I add harmonies, bass with voice + objects.

For me, it’s like taking people to dance around the world.

I will be around for the whole weekend at MTF Stockholm and am looking forward to meeting new people, discovering interesting projects and playing live. I will also be running the Jam Camp so come and make some music with me!

If you’ve read up to here and see me in the event, you must come and high five!