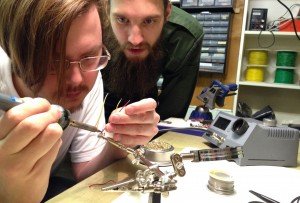 “And this is our space programme,” says Tomas Härdin, pointing to a battered old dining table next to a whiteboard. The whiteboard has schematic drawings on it, but otherwise there is nothing to suggest mission control. Codemill developer and radio engineer Tomas and computer scientist Petter Ericson are pointing out the various features of the Umeå hackerspace - ostensibly the world’s northernmost.

“…unless there’s something in Tromsø.”

The hackerspace, like many dotted in cities around the world, features piles of equipment in various states of repair, a mountain of old computer monitors, a 3D printer that looks like it has seen a lot of action - and another that has been stripped for parts. It has an area where you can lounge around and play videogames, a well-ventilated corner for melting down aluminium, a wall of neatly arranged power tools and implements, and a lot of partially-completed projects arranged, where size permits, on shelves and, where it doesn’t, on the floor.

Your everyday hackerspace, in other words.

“We have a bunch of big, beefy power supplies, loads of components, all the tools you could want to use, a really big, nice frequency standard… basically, resources to use for whatever project comes around.”

The hackerspace doubles as a meeting place for the youth division of the Pirate Party. It also hosts study groups, Free and Open Software projects, rocket enthusiasts, an anime club, the Gentleman Game Association of the North who get together to play board games, and others.

It has a couple of quirks, of course. The no-shoes rule, for a start. And, of course, the space programme.

“Considering the size of the town, it’s surprisingly big and well-equipped - which is sort of the mark of many things in Umeå. I mean - we’re just 100,000 inhabitants. It’s not a big town. But we do have things like the opera. We have a major university. We have these things that are surprisingly big and surprisingly well-funded. So I think that’s really what’s special about Umeå. Although we’re so small, it’s still the biggest town around. It’s 600km down to Uppsala which is the next town that’s bigger. So we can draw from this massive geographical area.”

“The nearest proper hackerspace to this one is not actually in Sweden,” says Tomas.

With three months to go before the festival, plans for the Music Tech Fest hack camp are already in development. The Umeå hackerspace has spawned a bunch of interesting music hacks in the past and they’re looking forward to getting involved in MTF Scandi. Music-related projects to date have included large Tesla coils and propane gas as well as delicate objects with tiny LEDs.

“There’s a whole bunch of us who are into this. There are the electronics people, of course - they’re definitely going to be into the Music Tech Fest. And of course the fire and the high voltage electricity people will also want to be involved. That will be fun.”

And the space programme?

“Yeah. We’re cooperating with one of the Google Lunar XPrize teams which are going to the moon next year,” says Tomas. “The team, called Part-Time Scientists, have four probes which are shaped like oversized Toblerone boxes and we’re designing an experiment that goes into one of these boxes. It’s about one kilo worth of gear that gets sent to the moon. We’re going to run a camera during the lunar night. And because it’s so cold, the camera will actually run better. But because there’s no sun, there’s no solar energy - so you have to use batteries.”

“The power supply is really the experiment,” explains Petter. “Keeping the whole thing running through the whole two-week lunar night is going to be the main problem.”

“Yeah - it’s really cold. Minus 170 degrees. There are no batteries that survive those temperatures as far as we know. So we have to figure out a way to heat them so they’re still pretty cold - but not so cold that they freeze to bits. We need them to be Umeå cold - not dark side of the moon cold.”

MTF Scandi runs from the 29th to the 31st of May this year and the 24 hour hackathon runs from Saturday to Sunday. Places are limited, but if you want to get involved, get in touch with MTF hack camp coordinator, Adam John Williams.

And while you’re in town, you’ll also get to spend time in the world’s most northerly hackerspace.

“Oh wait.” says Tomas. “There’s one up in Vännäs. But that’s just one guy in his shed. We should go visit him.”