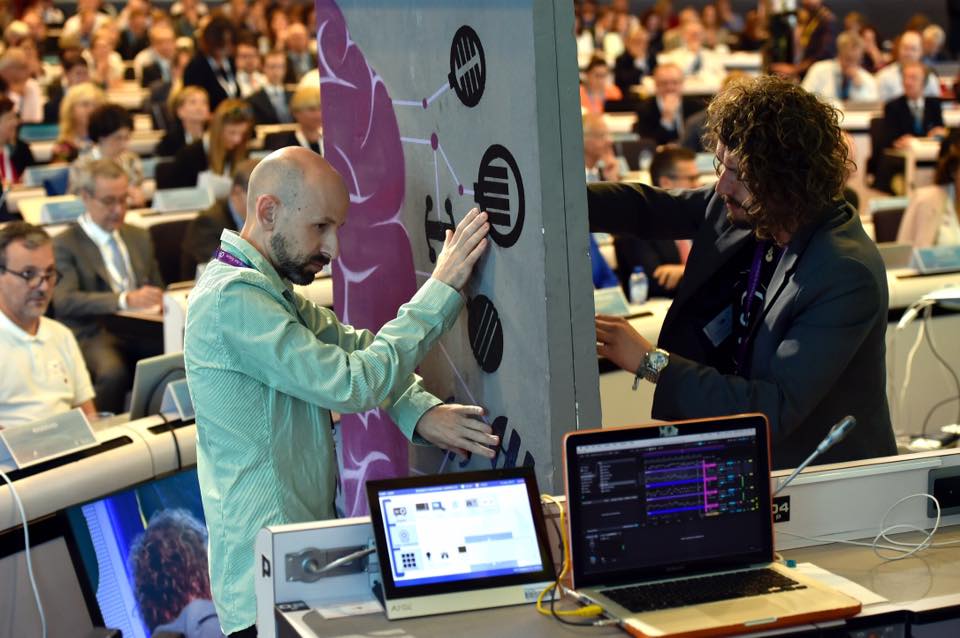 In my work I like to take icons & symbols and let them rebrand themselves, to explore freedom and to change how they are perceived by people. I use technology & music to motivate people to touch, to amplify their message & to make it stand out. In the past 2 years, one specific installation traveled all over europe - Berlin / Warsaw / Madrid / Zurich / Brussels… it’s also been to London and even arrived in LA! (where it decided to stay…for now). It’s a collaborative wall and musical instrument that let’s players on both sides play a track and create an arrangement together.

At the end of 2014, I found myself in Berlin - fully energized and confused after performing 2 gigs at Glastonbury Festival in the UK. I knew beforehand that this was my opening for a run from my (awesome yet depressing) studio life… I’m always running away, I like running away… it’s not the most heroic thing to do but still there is something cleansing (?) & exciting about the unknown.

And so, 3 months or so into temporary Berlin life I saw a call for the first Berlin MTF 24-hour Hackathon (that was also conveniently a short bike ride from my apartment). I obviously signed up (even though I did not know what a hackathon was at the time…) and even asked the fine organizers if I could present something at the conference.

Long story short - I showcased my sound hunting obsession with iMaschine (iphone) and some collaboration from the audience. I didn’t realize back then that this event would have such an impact on my life. About 2 weeks later I found myself at my second Music Tech Fest event in Paris, taking place in the famous IRCAM sound research centre, performing an improvised electronic piece called “Jamming with a comet”. It was sort of a Jam session with sounds captured from the audience and in collaboration with Rosette - the singing comet as they named it at NASA. The thing about improvisation is that you don’t have actual control over the final creation, you have to let go, soften the grip… and in that sense this community was the perfect vehicle for the ride towards artistic freedom, exploration and mindful creativity.

I went off stage storming inside, I was completely convinced that I sucked, but everybody else seemed to have enjoyed it. And so, I began pinning milestones into this map of a journey became my reality.

For the ״Geekpicnic״ tech festival in Jerusalem - my first actual fully commissioned installation work - I came up with the idea of making a double sided musical wall called #playthiswall - a one-off installation that we took down right after the festival ended. After the second Music Tech Fest in Berlin I had a drink with Matt - one of the members of the MTF production crew and a well-known music tech entrepreneur in Berlin who I had already known from previous events - to discuss an opportunity for making an installation in Berlin. About two months later, two walls were created and they started traveling throughout Europe - Warsaw / Madrid / Zurich, then came London & another one back in Berlin (Ableton Loop Music Makers Summit).

After a little break there was another offer on the table - playing the EU anthem (yes there is an EU anthem… ) at the EU commission building in Brussels, during the H2020 conference, as a part of a little MTF showcase arranged by Micheila who was also a speaker at this anticipated event.

The next stop for the wall was LA - first time on a plane and also in the US. We got invited to showcase at the 50th anniversary of the cultural twin city agreement between LA and Berlin (yes it exists…) and even the Mayor of Berlin came for a short visit…

These days the second wall (it’s the one that got more fame out of the two…) is live and well surrounded by young musicians at an Ableton & production school in LA waiting for it’s next adventure… and from a great distance - so am I.

I continued exploring different aspects of symbols that relate to freedom and I’m really excited about premiering my next installation - “FlagPiano” at MTF Stockholm.

And of course one special thanks for Michela & Dubber for their motivation & inspiration.