Gunk (geek punk) and getting your ears dirty 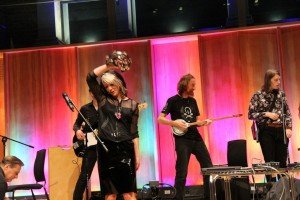 We’re just a few weeks away from Music Tech Fest London, and we could not be more excited. The festival takes place on the weekend of September 5 to 7 at the LSO St Luke’s - the home of the London Symphony Orchestra on Old Street - right in the heart of Tech City.

As a “festival of music ideas” we bring together artists and performers, academics and thinkers, startups and labels, inventors and innovators. From the latest research to incredible performances by fantastic artists such as Jason Singh, Coldcut, Shlomo, Lossy, Fiona Soe Paing and Eduardo Miranda’s Brainwave Quartet. As always, we’re disrupting the music industry, breaking new ground and, once again, we have some absolute firsts to be revealed.

The RS Components hack camp runs over 24 hours during the festival and features challenges from MTV, Beggars Group, SoundLab and more. The hacks focus on physical performance in 3D space, inventing new types of musical expression, new approaches to video, breaking down the barrier between digital and physical as well as accessibility in music. Hackers will work with artists and international mentors - and RS Components are bringing an incredible range of kit - from Arduinos and sensors to 3D printers, mini projectors and circuit boards.

Fakebit Polytechnic are hosting a Gunk (geek punk) Workshop where you can make rough and ready musical instruments out of old game controllers, form a band and take over the world.

On Sunday - get your ears dirty! We’re going full-on experimentation with the hackers - with artist/hacker collaborations and performances as well as a kids hack all about having fun making musical instruments, coding, building and making noises.

It’s a full weekend of music, ideas, invention and interaction at the cutting edge of music and technology.

If you’d like to be at Music Tech Fest London – get in touch. Boston was invitation-only, but very limited tickets for London are being made available to the public. We’ll be announcing those in the next couple of days, as well as some exciting additions to the lineup - so stay tuned!