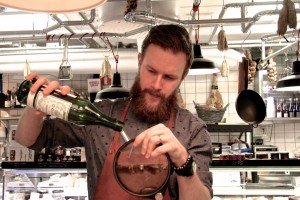 Emil Åreng is, all by himself, an excellent reason to visit Umeå. Considered one of the world’s top drinks mixers, he’s gained an international reputation for phenomenal flavours, incredible inventions, and local ingredients collected and prepared by hand.

He is, it’s fair to say, an award-winning bartender.

“There are three big competitions here in Sweden,” he explains. “You have the World Class that Diageo hold - you know, they do Smirnoff, all the big brands, the single malts… I won that one in Sweden. And that’s the biggest competition in the world. And then we have Barcardi Legacy. In that one, you create one cocktail that will be a legacy. Like a new Mojito or a new Dacquiri. And I won that one. And then you have Havana Club Grand Prix. A lot of guys in Sweden want to win that because you get to travel to Cuba and compete there. And I won that one. So I won the three biggest ones in Sweden.”

Emil’s bar is called Open / Closed. It’s a one table speakeasy, hidden inside a delicatessan - and it’s an experience.

“We have 16 places and we do a four course menu, but with spirits. So the first cocktail is like a starter. Then you go to the main course, and then something refreshing before you take dessert. We change the theme every second week - and it’s fun themes that people can relate to…”

“Two weeks ago we did Tintin in Tibet, so you could follow the book and see the story made into cocktails. Right now, it’s Nintendo. So I take four games and I make them into cocktails in some way.”

Suitably, there’s a classic Nintendo console set up by the bar at the moment so that you can play the games that the drinks are named for while you’re drinking them. You’ll start with the brilliantly named Bloody Mario, followed by a Triforce. The Soda Popinski follows to cleanse the palate, and you’ll round things off with Ducks and Guns, which features apple whiskey, pecan pie syrup, a whole egg and smoked pimento.

The drinks, it has to be said, are utterly sensational. Emil is an absolute perfectionist.

“We also make everything in house. We press lemons every day so it’s always fresh. We make our own syrups - we never buy anything because we can do it much, much better than all the big companies. And people come in and say “Do you have strawberries?” No, it’s fucking December. So we only use the things we can use - like Arctic raspberries because that’s a really unique flavour. Like the big chefs do - take the ingredients that they can find just around the corner.”

So… want to go to a festival where you can get a particularly good drink? We’re very excited to announce that Emil will be running the bar at MTF Scandi in Umeå, May 29-31. And just in case you hadn’t worked this out - this will not be your ordinary festival bar.

If it seems unusual that such a highly ranked international champion would base himself in a small, northern Swedish town, Emil has his reasons.

“When you look at Sweden as a whole, everybody’s very ‘for themselves’ - on their own… but Umeå is totally different. It’s open, playful and people are curious to try new and interesting things. So for instance, we can announce that we’re doing something out here in the courtyard - something new and different - and we sell out in two hours. People are pretty cool here in Umeå - and there’s a lot of really interesting stuff going on.”