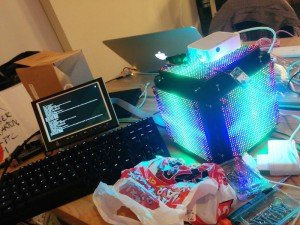 Get ready for #MTFCentral

#MTFCentral is upon us. The performers, presenters, participants, hackers, artists and crew are arriving in Ljubljana from their various places around the world - and all manner of musical inventions are being unpacked, assembled and prepared.

The success of the #MusicBricks project has been overwhelming. We’re going to be showcasing some of the most incredible projects that have emerged since it began, and you’ll get to see the ideas that have been supported and developed to commercial prototype at #MTFCentral this weekend.

Now more #MusicBricks elements are going open source. Search by Sound has just been released under the MIT licence (allowing developers to do more or less anything they like with it - including commercially) together with several other related tools, including Sonarflow for iOS and Android - and is available to the Hacker community on Github.

Try it now or hack with us at #MTFCentral in Ljubljana, where the inventors of the technology will be on hand to give advice and tips.

All of the #MusicBricks tools are open for hacking at #MTFCentral - and it’s your last chance to develop a hack with support and microfinance to take your project to commercial prototype stage.

#Hacktheartists - and merge sound and light

We also have tech, APIs and expertise on site from Philips Hue for you to work with to create new, immersive musical experiences.

In addition, our partners at B3 Media tell us that they have processed all of the #hacktheartist applications and have selected five fantastic cross-platform UK artists. They’ll be arriving at #MTFCentral with their ideas and their talents - and they’re up for being the subject of a hack themselves. If you’ve hacked software and you’ve hacked hardware, here’s your chance to hack creativeware.

Whether you’re a hacker, a music fan, an artist or just curious about the future of music innovation, it’s going to be a fantastic, creative, surprising and unique weekend of music ideas. Look forward to seeing you there.