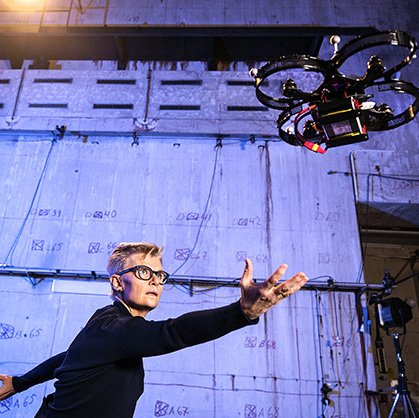 Åsa Unander-Scharin is a dancer, researcher and professor of musical design. She began working with robots during the 1990s after creating animated dances on screen. When she first encountered an industrial robot, she realised that inside it lives a dancer, who could make breathtaking backward bends and express emotion.

Her choreographic works have been presented at festivals, art galleries and conferences in Europe, Japan, Vietnam, Canada and USA. In 1998 her first robot choreography (ABB irb 1400) was awarded an honorary mention from VIDA 2.0. Since then she as presented performances including ‘Artificial Body Voices’ for Swedish television, ‘Opera Mecatronica’ at Swedish Royal Opera House and Rotterdam Opera Days, ‘Robocygne’ inaugurating the International Tanzmesse at Deutche Oper am Rhein in Düsseldorf 2012, Sing the ‘Body Electric’ at Swedish Theatre Biennale and Cape Town Opera, and two dance films ‘Black and White Swan’ for Musica Vitae 2013-14.