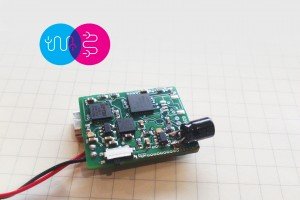 There are 50 places in the 24-hour hack camp at #MTFScandi for the best hackers from across Europe - and so far, 12 countries are represented. We have access to exclusive new technology from top European research institutes - and microfinance for the best projects to incubate and further develop to commercial prototype.

The #MusicBricks project ensures that ideas that start at Music Tech Fest go on to have a sustainable life outside of the festival. At #MTFScandi, we’re being joined by some great music tech minds to help choose those projects.

Matt Black is one half of the legendary electronic music duo Coldcut, and co-founder of the Ninja Tune label which has brought us the amazing talent of the Cinematic Orchestra, Bonobo and Amon Tobin. At Music Tech Fest we think of Matt as the “godfather of our festival” - he has been with us right from the start, premiered Ninja Jamm at the first fest, engaged some of our community in building the app, and has been demoing new ideas at every fest since.

LJ Rich is a journalist and presenter for BBC Click, specialising in music, tech, sci-fi and social, as well as a composer and pianist. At Music Tech Fest Boston LJ joined as a first time hacker and hasn’t looked back since - she teamed up with fellow #MTFHacks winners and has continued to develop a series of music therapy apps as well as report on hacking. She spoke about her conversion to a hacker at TEDx Tokyo.

Paul Sonkamble has worked on the creative side of business development as Senior Director, Creative Business Development & Innovation, EMEA at Warner Music Group, and previously Head of Innovation and Insight at EMI Music Nordic. Paul is currently involved in a number of innovative ventures for the music industry.

Jason Singh is a versatile vocal sculptor and beatboxer, who has worked with the likes of Nitin Sawhney, Rokia Traore, and Sebastian Rochford and has been resident sound artist at the V&A in London. Jason has been central to every one of our London fests, and has collaborated with a wide variety of hackers and artists, often in amazing impromptu performances, which have included a world first with Leafcutter John, Tim Exile and Yazz Ahmed at the Barbican LSO St Lukes.

We’re really excited to have such an incredible roster of high quality judges reviewing and selecting projects that will go on to shape the future of music tech. Check the website for more information about #MusicBricks.